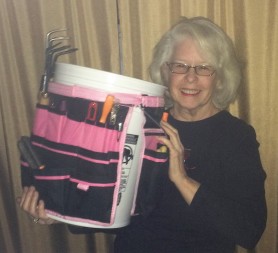 The 2016 Garden Glove Award was given to B.J. Dennis. B.J. moved to Holiday Island in the Spring of 2013 and immediately began work on her garden and landscaping. A year later she was invited to join the garden club while on the Trolley touring the Springs of Eureka Springs. It was the highlight of her year and she has jumped in with both feet (and hands) to further the efforts of the Club. Having been a member only six months, she helped with the Barn cleanup, the Parking Lot Project, attended every meeting, accepted a position on the Executive Board,  and shared her talents in and out of the garden with the members of the club in many ways.

Each year the President of the Holiday Island Garden Club selects a Member of the Year and presents them with the Garden Glove award.  The winner is announced at the November Holiday Party. There is no special criteria other than a devotion to the club, its purpose, its future, and being actively involved.